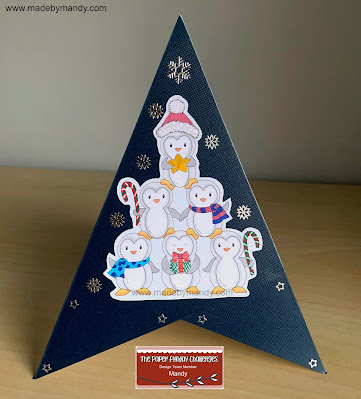 We have the last challenge of the year over at The Paper Funday.
The Theme is Anything Goes with the optional twist of Christmas. If like me you are on a roll then Christmas will be very easy to do.

We are sponsored by Paper Nest Dolls who have some gorgeous images. It was very hard to choose on to work with as there were so many cute ones.

I decided on this cute image Penguin Tree. I just love the cute little penguins all supporting one another to make a tree shape. I coloured it with Promarkers adding gel pens to the candy canes, a glitter pen to the present with it's Ultra Fine Sharpie pen patterned paper. The gold star is a new Spectrum Noir glitter marker from Crafter's Companion. The sheer amount of glitter in them is amazeballs. I added some glitter glue to the santa hat and is is so sparkly. The image was then fussy cut ready to use. 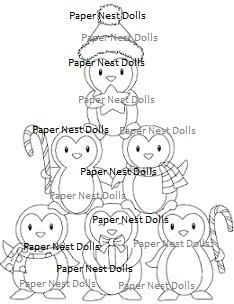 Around blogland I had seen this shape of card but didn't have a clue what it was called.  After doing some Googling I found out it is called a Teepee card. I found a tutorial HERE on Mixed Up Crafts and could not believe how simple the fold is. It looks so effective and is just 3 pieces of square card. Very clever whoever thought of doing that. Anyhoo, I made a rough one with scrap paper as I wanted to see what it looked like and would it fit into a C5 envelope. By making the squares 6" it fits comfortably into the size of envelope I use for many of my cards ☺
So after practicing I made the card with the base cardstock. It is a shiny navy blue on this side and white inside which is where the sentiment will be written.
The front is the penguin image as that is the main focal point.
Side 2 is the bauble which is a die from Crafter's Companion. I had initially cut it in the same holographic card but it looked too much so I used plain white card and added loads of loose glitter to it. It is really sparkly and so intricate.
The Merry Christmas banner is from The Works. It is a discount bookstore that also does some crafty things. They have started doing their own dies which are super cheap. This was only £4 and is quite big. Definitely good value for money. 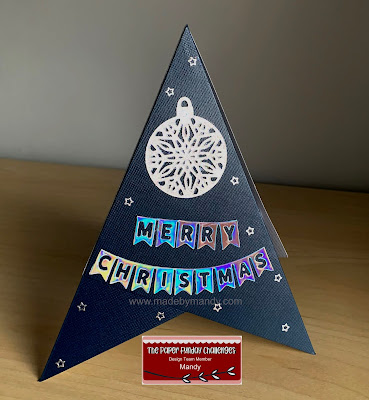 Side 3 is a rubber stamp Under The Tree from Crafter's Companion. I was very fortunate to win a Facebook competition on their page and the prise was 4 sentiment stamps which this was part of. I coloured the trunk with a Promarker and added a yellow star gem to emulate the gold one on the penguin tree. I added some silver peel off stars and snowflakes to finish off the card. 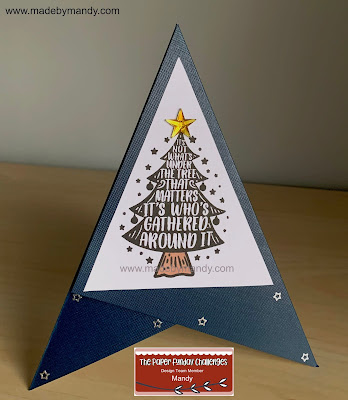 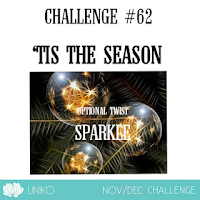