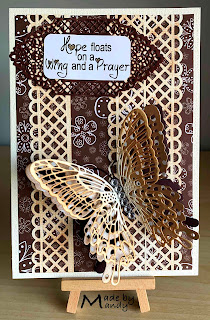 For the last few weeks I have been decorating our bedroom. I finished the painting on Friday and the next stage is getting a new carpet and bed. However the Government has now said it will be at least a further 3 weeks of lockdown so no new carpet for the time being. We are currently sleeping in the spare bedroom which is a lot smaller so I will be moving furniture back into our room tomorrow.

Between decorating I have been making cards for friends and neighbours using the Statement Butterfly from Crafter's Companion and the same digital sentiment. All cards are being made using different colour combinations, papers and sketches as I don't like to make 2 cards the same.

For this card I used the current sketch from Atlantic Hearts for the layout. 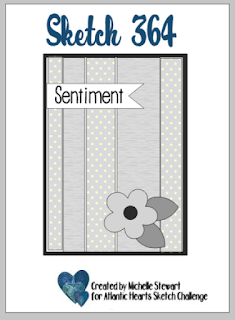 The base card has an offcut of paper from Clare Curds paper pack by Papermania which I have had for many years. I used a Martha Stewart punch to create 2 strips that have been distressed by inking with an almost dry mini inkpad I keep just for that purpose.

I used a digital sentiment from McMahon Five Designs who retired some years ago from designing stamps. The sentiment has been trimmed and I have used a corner punch to round it off. The little hearts are coloured with a Sakura bronze metallic ink pad.The sentiment has been matted onto a piece of metallic paper that has been die cut using the Intricate Trellis metal die from Crafter's Companion.

Finally the butterfly is made using 3 layers. The base layer is plain brown card. The middle layer an offcut of paper from Craftwork Cards and the top layer is plain cream hammered texture card. This has been partially inked with a Tim Holtz Distressing Ink Pad and finished off with some clear diamante gems.