4600 Gifts for the Commonwealth Games 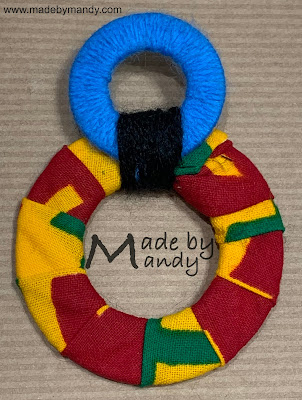 I live in a suburb of Birmingham and today is the last day and closing ceremony of the Commonwealth Games that have been hosted by our city. It is fair to say it has been a divisive event with many people being unhappy it was held here for many reasons. However I have seen it as a positive event and a boost for our city both economic and hopefully people will have a different perspective about our city.
I had the opportunity to take part in a craft event 4600 Gifts. Basically members of the public living in and around Birmingham attended craft sessions and the purpose was to make a gift that would be given to each competitor in the Commonwealth Games. It seemed as a crafty person too good an event to miss out on so I booked my place and headed off to a shopping centre in Birmingham City centre. 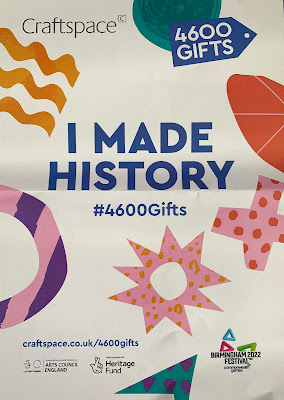 The basic premise was to use one big washer and then join it to a smaller washer. There were strips of fabric and coloured wool, all in the colours of the commonwealth flags. All supplies had been donated by local companies and chosen by the designers for the project. You could choose whichever you wanted and all instructions were given with people on hand to show you if needed so crafters of any abilities could take part.
As you may see on my blog I like bright bold colours and the fabric strip for the larger washer instantly spoke to me. You fed it around the washer looping it tightly and then I sewed the loose flap to make it really secure.
I would have loved to use a bright green wool for the top section but there was none available to me so I opted for the blue instead. Finally you join both sections together to complete the gift by looping the wool through both sections.
We then had a tag to fill in to be given with our gift where you could put a few words for your intended recipient. They were then boxing them up and adding a key ring so the competitor could use it on their bag etc. 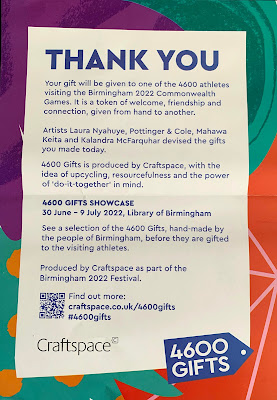 It was a great opportunity to meet new people and a couple of the designers who were blown away by the response. It was great to be a part of a once in a lifetime event for our city. It is surreal to think that something I have made has been given to one of the athletes that have taken part. I did add my blog details so if the lucky person ever visits the may even see this post.
We live very close to Alexander Stadium and the Red Arrows flew over our house on the way to the opening ceremony. We love going to air shows and that was a huge highlight for us. Seeing them going over our back garden and then just seconds later seeing it on the BBC coverage flying over the stadium was just epic. 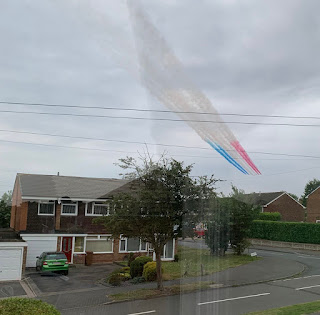 This photo was taken by neighbour over the road. You can see my green car in the driveway of our house. It was tremendously exciting ☺

Email ThisBlogThis!Share to TwitterShare to FacebookShare to Pinterest
Labels: Recycled