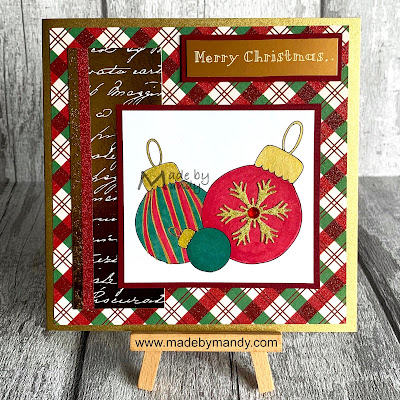 Stamper's Delights run a Progressive Freebie challenge on Facebook and give you a free image set to work with if you make a card using any of their images.
I was running really behind last month as I was preparing to go on holiday and had my 50th birthday and 20th wedding anniversary which led to lots of family thing and meals out. My birthday last year was a bit of a non-event due to bad timing so it was really nice to have a proper celebration this year. I managed to get this added to the Facebook group but didn't have time to blog it.
The image is an older one from Stamper's Delights Xmas Decoration and I have used Promarkers and a gold gel pen to add decoration to the baubles. Mum used to have a stripy one like that when I was little. It was a really fine thread wound onto a plastic bauble that mysteriously became unravelled... (I was always taking things apart to see how they were made LOL)
The plaid paper has loads of glitter embedded in the red. It is from a traditional Christmas pad all in red and green so I used gold throughout to add some metallic shine. The text side strip and sentiment have both been recycled from old Christmas cards.
I added some red sparkle washi tape, a die cut snowflake from a set I have not used before and a red sparkly gem as a finishing touch.