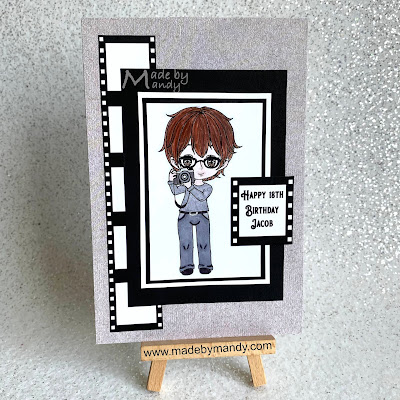 I had been asked to make a card for an 18th birthday for a lad who is keen on photography. I instantly suggested I use this digi image Chibi Aiden Photo from Stamper's Delights which was met with approval.
Initially I had a plan of what colours I would use and then I saw this current sketch at Tuesday Morning Sketches 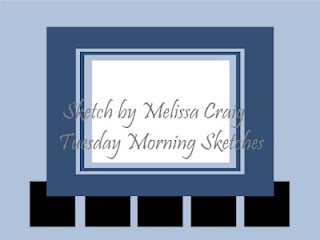 I thought if rotated I could see the squares being a border of a film strip and I completely changed the direction of my card. 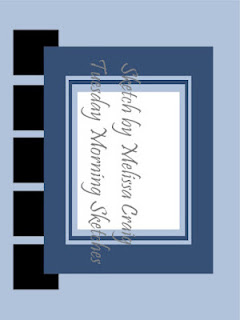 The film strip is a digital stamp from Word Art World. Jennifer had stopped making word art which was a shame as I have had a lot of sentiments from her over the years. Recently she announced she was starting back up again though YAY! Check out her new look site for freebies and really great value packs.
The film strip has 3 slides in it so I added another to it and cropped it to a strip of 5 to suit the sketch. The extra one I thought would be perfect for the sentiment which I typed in using my graphics program.
I covered the card blank with a mottled grey paper. It is only a small card and the layers of white and black card are bold so I didn't want to distract from the main image.
Jacob has dark brown hair so I coloured to suit in Promarkers and then added some shading with pencils. The rest of the image has been coloured with mainly grey Promarkers and added some silver gel pen accents. I wanted to keep it monochrome like a black and white photo so I am pleased with the overall look.
As this has used a Stamper's Delights image I am able to enter it into their Facebook Progressive freebie which is a bonus too.