Cute As A Bug for Mother's Day 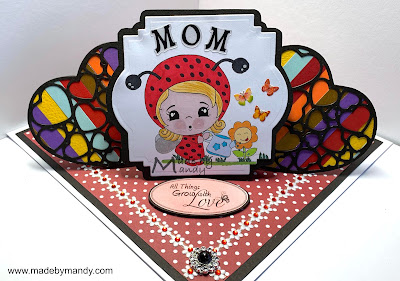 Stamper's Delights holds a Progressive Freebie challenge on Facebook every month. If you make a card with any of their images then the following month you can request that set for free. I love Janice's images and you get lots of images and sentiments when you take part so it is a win win.
I bought loads of images recently with a gift card prize and this is one of the images I chose Cute as a Bug. I love the smiley face on the flower and the cute little expression on the bug.
I coloured the image with Promarkers adding some pencil to the hair for definition. I added black dots so she looks like a ladybird, while gel pen for highlights and glitter marker to the wings for shimmer.
I have seen lots of triple easel cards recently but most seem to stack behind one another and obscure the one behind.  I wanted to try something a bit different so made it up as I went along.
I have seen a lovely card around blogland 'Rainbow Heart' by Mifta of MS Kraft Store and love the effect of the coloured strips. Inspired by this I used a lovely heart die that I got from The Works and cut this twice from black card. Behind the shape I added 1cm wide strips of scrap card in different colours. The strips were trimmed to the outside of the heart and I then cut another plain heart to sandwich inside. It was a bit fiddly but really happy with the results. I used double sided tape sheets for the heart and if I did it again I would have cut that first and added the strips to that instead of doing it the other way round and making it harder for myself..... lesson learned!
The image had been cut and matted using a Nestabilities labels 22 die. I had used the largest one for the image already so cut around this to make a larger one in plain black card.
I then started to place them together and test the easel function. Nothing I did looked right until I did it as a diamond pattern so used an 8" square card base and offset the shapes. I made a stopper using the sentiment which is an old digital from COLORink Digital Stamps who are now retired. It is perfect for this image and simply coloured with a marker.
The card base has a layer of thin black card and then a red spotty paper. I used self adhesive flower ribbon and added a little red gem to the centre of each one. The silver embellishment where they intersect is from a trim that was in the bridal section of The Range a few years ago and I added a black pearl to the centre.
Finally I added some of my favourite tiny glitter butterfly stickers and some lettering to the image. AS it doesn't specifically say Mother's Day Mom will be able to keep it on display for longer if she wishes and the bright colours behind the heart with be cheerful on even the gloomiest of days.
You can see in the image below how the card folds down. The sentiment is the stopper in front of the image and the 2 silver embellishments go behind the hearts so they stand up. It's a bit fiddly but once up, they stay up. 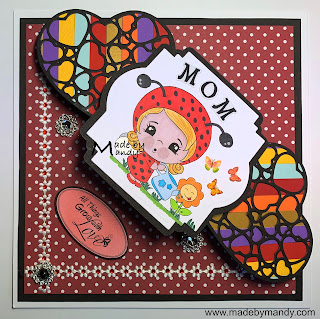