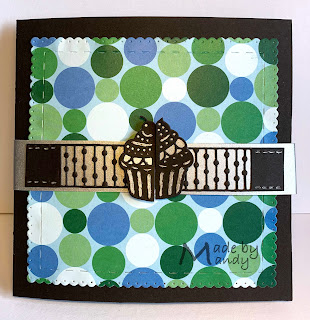 Today is my Father In Law's birthday and inspired by a pop up snowman card I had seen online I thought I would make a pop up golf ball. Little did I realise what I was letting myself in for though.....
I started off making the golf ball. I found a template online to make the ball and made it out of white card. I used 200 gsm and it seemed too thin so I did a slightly smaller version in thicker card. This still seemed too thin. I tried to use an elastic band to do the pop up bit but it ripped the card so I used some elastic instead and this seemed to hold up better.
To emulate the texture of the golf ball I used an embossing folder and cut the panels slightly smaller than the template, then taped them on with strong red liner double sided tape. After some manipulation I realised the joints would not hold very well especially where the sides were held together with the elastic so I ended up having to do some more strengthening. I was losing the will to live by this stage and seriously considered binning the blooming thing! I decided it was as good as I was going to be able to get it and stop messing with it. 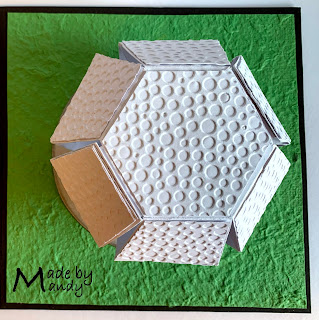 I was lucky to win a challenge recently and the prize was a gift certificate for DRS Designs. They had some lovely rubber stamps and I chose this fabulous Golf Is…… image. I really liked the frame of golfing terms and thought it would be nice for Dad as he is golfing crazy. 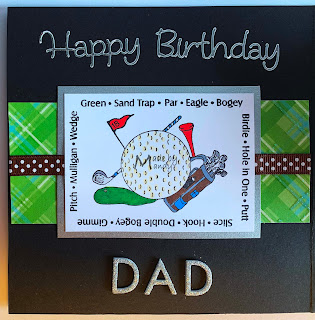 I coloured the image with a combination of Promarkers and Spectrum Noir pens. I mounted this onto silver card and added some ribbon and a plaid glittery patterned paper in green.  I added some peel off stickers for the sentiment and some foam alphabet stickers that have silver glitter on them for Dad. This is the inside left hand side of card.
The pop up ball is on the right hand side of the inside. I added some handmade green paper which has a lovely texture for the 'grass' and a silver cardboard hole that the ball goes into. This is the side profile of it. It doesn't completely spring into a round shape. If I pulled the elastic tighter then it made the ball go a weird shape so I had to compromise. 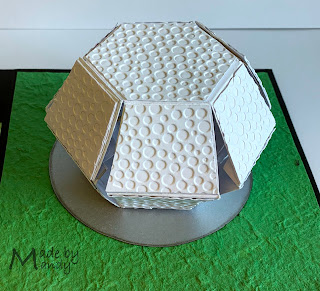 This is what the inside looks like with both sides in view. 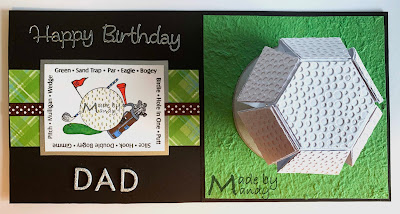 To keep the card closed in the envelope I realised that I needed to add a belly band to it. I used a cupcake die that I received in a mystery clearance bag from Crafter’s Companion. I cut it from black card and then added a layer of silver underneath it so it made it stronger and added contrast. Where the band is die cut was quite weak when the golf ball was pushing against it. I added some silver gel pen and clear glitter to the embossed detail in the cupcake.
The patterned paper has been cut using a die from Julie Hickey Designs.
I was quite pleased with it once I had finished with it. I'm not sure what I was doing wrong or why I couldn't get a good balance with making it springy and tearing the card but I managed it in the end with some perseverance and a lot of swearing...... I just hope he likes it :)