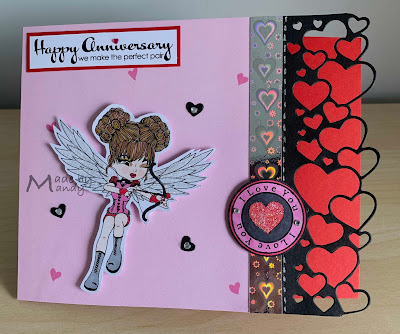 It is my 49th birthday on the 28th and also our 19th wedding anniversary. I was dreading turning 30 so my husband married me so I could count 30 birthdays and however many wedding anniversaries. As I have got older I can't believe I felt that way so many years ago.... I think looking back it was to do with other things that weren't quite right in my life and I transferred it to a big birthday. Silly really.... I am much happier being my age now than when I was younger. Thankfully me and Paul have been together 31 years through lots of ups and downs and we are still very happy with one another.
The starting point for this card was the Heart Confetti Edge'able die from Crafter's Companion. I had seen this on several projects when it first came out and bought it specifically to make a card for my hubby.
I have some large sheets of card from Aldi that are 24cm x 34cm wide. This die is 15cm high so I cut the red card to 15x34cm. I cut the edge'able die from a scrap of black card and then folded the card to suit the placement of the black section so the red from the inside came through. This is then adhered to the front section and the finished card is like an A5 size on it's side.
I have used some heart paper in pink and added some of the black hearts that are leftover from the die cut edge. The heart holographic 'ribbon' is a scrap of paper that has been cut so the heart was placed in the centre.
Stamper's Delights do a Progressive Freebie challenge on Facebook. If you have made a project using one of their images then the following month you get a free digital set, sometimes two.
The image is Cupid 3 from Stamper's Delights. It comes with and without wings and there is a really good value Cupid Honey Bundle which has loads of variations of Cupid images on sale for only £5 at the moment. I have coloured using a combination of Promarkers & Spectrum Noir pens and a very fine black Sharpie pen for fine details. On the wings I have used a grey pencil to add details to the feathers and then lots of glitter to make the wings really sparkle. A gold gel pen has been added to the swirls in the hair. The image has been fussy cut and mounted onto foam squares.
The circle sentiment is also from Stamper's Delights. I think it may have been an old blog freebie as it doesn't seem to be available any longer. I used the same markers and glitter as the image and added some bling to cover some little stars. The sentiment is from Imagine That Digi Stamps and is from an older set called Sweet Tea.
I added some little heart shaped gems to the black hearts and the sentiment and faux stitching in a silver gel pen to the black edge of the die cut.