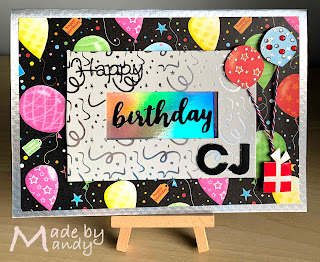 I am the first to admit that I struggle with making cards for men. There is just not enough opportunity to add girly stuff. It is quite ironic as I am not really a feminine girly girl but love to make female orientated cards....

I bought some Julie Hickey dies from Hochanda last year which are perfect for men's cards. This card is one I made for my nephew CJ. He has grown up all his life with Aunty Mandy making his cards, I try to make them personalised for him or relevant to hobbies and pastime he is interested in.

The card base is a silver cardstock that has embossed stars in it. I have added some balloon patterned paper that was from a birthday pack by Dovecraft.

The lighter frame has been cut with one of the dies. This card is a textured metallic card I have had in my stash for many years. It has a pattern on it which reminds me of streamers and party poppers.

I added a layer of holographic silver card under this and separated the layers with 3D foam. Happy is a silver peel off which has been coloured black with a Sharpie marker pen. Birthday is one of the Julie Hickey dies. CJ is lettering from a Cuttlebug alphabet.

The gift has been recylcled from and old Christmas card. The blue and red balloons have been cut from the same backing paper and I have added silver star peel offs and various gems. Finally some Papermania twine has been added to the balloons.