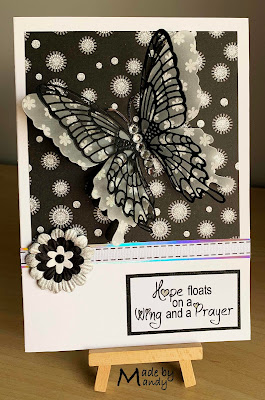 The Crafter's Companion Statement Butterfly die has made another appearance on this card. I fell over in the garden on Tuesday afternoon and smashed my left knee quite badly into a large rock in the rock garden. It is fair to say it very bloody hurt so I had to put the decorating in hold while the pain subsided and swelling went down. On Wednesday I cut out lots of pretty butterflies in different cards and papers. I have 2 drawers of offcuts so I selected lots of combinations.

My plan is to make cards for my neighbours based on the same butterfly and sentiment using different papers and card layouts.

I used the current sketch for the layout from Stella Says Sketch. 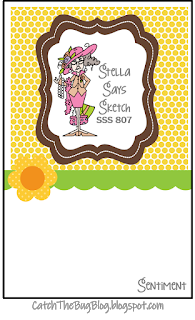 The butterfly back layer is solid plain black then a solid layer of a glittery vellum. The top layer is the more ornate one cut from black card. I have added gems to the centre body.

The back layer of patterned card is an offcut from DCVW with lots of silver glitter on it. Following the layout of the sketch I added a self adhesive ribbon which was stuck to a strip of silver holographic card. The paper flowers have been coloured with a metallic silver pen and a black Promarker with a black gem added to the centre.

Finally I used a digital sentiment from McMahon Five Designs who retired some years ago from designing stamps. I coloured the hearts with a silver glitter gel pen.